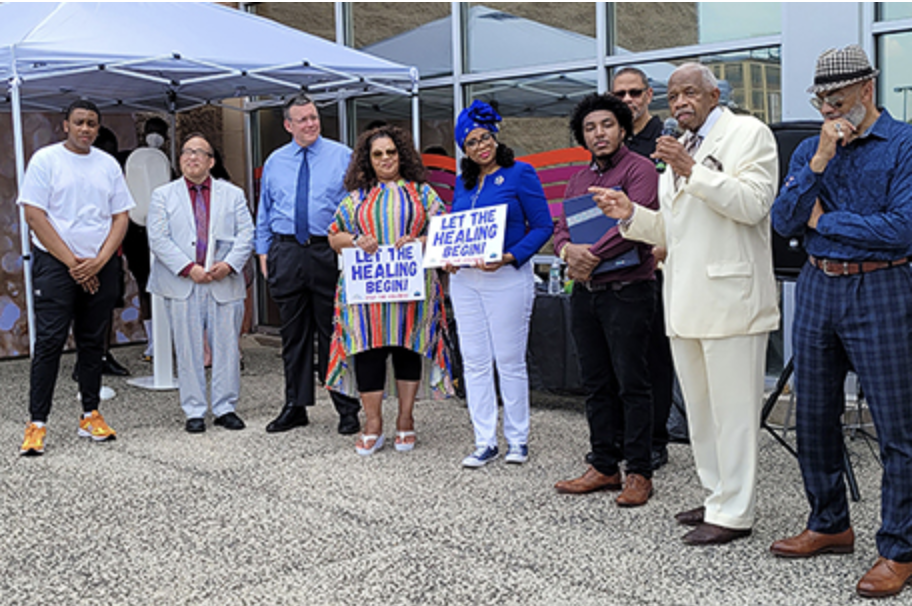 Philadelphia has experienced yet another violent week with dozens of people shot. The homicide rate is up 35% from this time last year, and we have surpassed last year’s total number to date.  Like many major cities across the country, some data appears to show that there is a strong relation between the shutdown and increased violence.  What can a mother do in the face of this senseless violence?  How can a child peacefully help to fight back?

After almost a half century, Christian, Muslim, Asian and Jewish leaders of all races and faiths in Philadelphia are uniting to battle the violence in our streets.  What began with the late Philadelphia legend, Reverend Melvin Floyd, now continues through his eldest daughter, Archbishop Mary Floyd Palmer. Floyd Palmer is the presiding prelate of the multicultural Philadelphia Council of Clergy, a proud 2020 Honorary Centennial Member of Zeta Phi Beta Sorority, Inc., and the founder of the Community Healing Project 4 All (CHP4ALL).

Following in her father’s footsteps, Floyd Palmer is reaching out to others in the anti-violence movement and explaining the need for solidarity.

“In the 1970s, my father worked collaboratively with the Crisis Intervention Network, the House of Umoja and others to address the gang war crisis,”she said. “Many attribute his success to his van with the coffin on the top, but I realized that the real secret was in his willingness to work with others.”

“There is no greater crisis in our city than the almost daily violence we are now experiencing,” said Imam Jamil Abdullah of the Philadelphia Masjid, who corroborated her story.  “We stopped it once before and we can do it again, but it is crucial that we set aside our differences and battle from a united front.”

The Community Healing Campaign has no van, but uses unique HEALING POSTERS™ with distinctive messages that say, “Not my Child, Not my Block,” “Covered in Prayer” or “Let the Healing Begin.”  Residents and businesses around the city are prominently displaying these signs in their windows.  The goal is to equip and arm mothers and young people with tools to help create safer corridors that make a difference, block by block.

“I was surprised how receptive my neighbors were and how the posters opened lines of communication between us,” Genetta Yates, a grandmother who distributed posters on her Turner Street block,said.

Garnering national attention for  this effort is Kimberly Davis, the executive vice president of social impact and growth initiatives for the National Hockey League, who led the organization to support  this exciting initiative.

“We are proud of the wonderful efforts of our new partners at the CHP4ALL to promote community healing especially to our young people,” Davis said in a public service announcement.  “The HEALING POSTERS™ are not only a great vehicle to help quell the violence, but they are also a great way to get our in-home and in-school STEM academic resources called FUTURE GOALS™ to the parents and students who need them.

We’ve sponsored thousands of flyers with the hope that anywhere a child sees these colorful and powerful messages they are reminded that they are wanted, valued and loved.”

“I want to add my voice because this grassroots approach, block by block and neighborhood by neighborhood, is needed like it has never been needed before.  Not just here in Philadelphia, but all across the nation,” U.S, Rep. Dwight Evans (D-3rd Dist.) told a crowd at a recent rally.

“We need a COVID-19 response to this senseless violence, and I applaud this grassroots effort to take it to the streets with a unifying message of hope and peace,” he said during a press conference last February.

Jeff Brown, Owner of ShopRite, not only sponsored thousands of HEALING POSTERS™, but is making them available to customers at several of his store locations.

“We like engaging young people to play a role in providing a peaceful solution and empowering moms as they go home and use the posters to help bring peace to their block,” Brown said.  “Best of all, they are absolutely FREE!”

“Violence starts in the heart,” said City Councilmember At-Large David Oh.  “Change has to happen within. I join this effort to reach out to those impacted by gun violence and murders to share that fear and retribution is not the answer.  Don’t give up on your life or anyone else’s. There is a bright and meaningful future ahead if we can start